Genocide in Rwanda: Me against my brother, by Scott Peterson 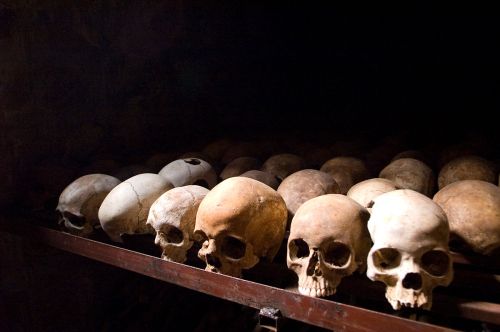 Unfortunately, the question of whether humanity as a whole learned a valuable moral lesson from the Holocaust was dramatically answered in the negative during the Rwandan genocide of 1994. Not only did history repeat itself, but so did world indifference to the misfortune of a million victims. In Me against my brother (New York: Routledge, 2000), journalist Scott Peterson vividly describes, based on personal observations and extensive research, the ethnic tension and the genocide in Rwanda. In the chapter “Genocide Denied” he also covers world reactions, including, unforgivably, France’s defense of the Hutu aggressors and the isolationist policies of the United States. He argues that these were important international factors that made the mass killings possible. Above all, the author persuades us that, unlike other ethnic tensions in Africa and the Middle East, the Rwandan genocide could have been averted by effective U.N. involvement: “In Rwanda Hutu extremists were often just young men with machetes or ill-disciplined soldiers” he states. (292) As the title of the book suggests, neighbors, former friends and even family members killed many of the victims in Rwanda using rudimentary weapons: most often machetes that had been previously employed for everyday household purposes and agriculture. Why then did the U.S. refuse to intervene?
Peterson points out that a few months after giving the inaugural lecture at the United States Holocaust Museum in April 1993 and expressing his commitment to fight the evil of genocide throughout the world—“But as we are its [evil’s] witness, so we must remain its adversary in the world in which we live”—President Clinton, having just pulled humiliated American troops from Somalia, urged the United Nations not to intervene in the ethnic conflict in Rwanda (289). Peterson elaborates: “Genocide must be organized to be effective, and in Rwanda that took time and left many traces. But Washington feared ‘another Somalia’, and so the first instinct was denial that genocide was even occurring—that would have legally required action to stop it. The second instinct was to disengage entirely, as the US sought to slash UN troop numbers. The third move—at least from the part of American policy-makers—was to bully any other nation from acting” (290). In hindsight, Bill Clinton would later declare that not interfering in the Rwandan genocide was the biggest regret of his presidency.
Between April and September 1994, the Hutu majority in Rwanda ruthlessly massacred almost 1 million men, women and children of the Tutsi minority. Tensions between the two ethnic groups rose during the early 1990’s over control of the country. The Hutu government of Rwanda, backed by Belgium and France, had more or less ruled the country since their revolution against the Tutsi elite in 1959. However, the Tutsi minority in exile, led by the Rwandan Patriotic Front (RPF) under the leadership of Paul Kagame, was attempting to reaffirm power in Rwanda. The Hutu extremists, who called for a “final solution” to the “Tutsi problem”, gained political momentum during the 1990’s.
The Hutu Power movement galvanized the support of part of the army and of powerful politicians. The assassination of Juvenal Habyarimana (1937-1994), the third president of the Republic of Rwanda, on April 6, 1994, only stocked the Hutu extremists’ hatred and their suspicion that the Tutsis were out to destroy them. They blamed the Tutsi-led Rwandan Patriotic Front for the crime, using the assassination of the president as a pretext for mass murder. Transmitting their message mostly via radio stations, they urged vendetta against Tutsis as well as against moderate Hutus.
The result was atrocities that are almost beyond description. Nonetheless, Peterson attempts to give readers an impression of the sheer volume and violent nature of the deaths of hundreds of thousands of innocent civilians. “In the next weeks, the death toll began to merge into a statistical mass. In this village one Tutsi survived from a population of 400; in that town some 2,800 were slaughtered; dozens of parish churches were turned into abattoirs. To fully appreciate the nature of Rwanda’s mass killing, however, requires extracting the terrific agony particular to each death. That is now an impossible task. But an extermination rate of 45,000 each day means little, unless you explore and taste the charnel house yourself” (263).
The Hutu Power movement reinforced one simple, hateful message: in the power struggle with the Tutsis, it’s us versus them. Either we kill them or they’ll kill us. We’ve seen over and over again throughout history how this “us versus them” mentality can lead to the dehumanization of members of another ethnic or religious group. This makes genocide not only possible, but also–in a dramatic inversion of ethical standards of right and wrong–a moral duty. Scott Peterson’s well-documented book, Me against my brother, shows the danger of this dualist mentality and, perhaps even more so, the danger of lack of intervention by the rest of the world when genocide occurs. Genocide, he points out, is not just a “humanitarian crisis”–as the international news conveyed the Rwandan disaster–any more than mass rape in Bosnia was a “gynecological crisis”. Genocide is a massive crime against humanity that reveals the moral breakdown of our civilizations in general: particularly when the world refuses to intervene and help the victims. As the UNAMIR commander in Kigali, General Romeo Dallaire, notes with great regret about the Tutsi genocide in Rwanda: “The biggest crime of all is that we weren’t able to keep it from happening” (290).

Comments Off on Genocide in Rwanda: Me against my brother, by Scott Peterson

Filed under Claudia Moscovici, genocide in Rwanda, history, Holocaust, Me against my brother by Scott Peterson, nonfiction